Blog - Latest News
You are here: Home / All About Anna Weatherley and her Handpainted Porcelain Dinnerware 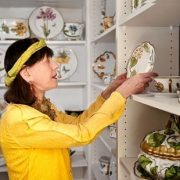 Who is Anna Weatherley?

Although she’s probably best known for her line of handpainted dinnerware, Anna Weatherley has had many careers:  from arms dealer (yes, really!) to famous couturiere to setting up handpainting studios in Hungary. Eventually, she was even commissioned by First Lady Laura Bush to design a collection of china for the White House. How did this happen?  When she was young, Anna moved from her native Hungary to Australia.  There, she studied art and design and soon became intrigued with Afghanistan, so she started a business importing furniture and textiles from Kabul to Sydney.

Eventually, she settled in Washington D.C., but her passion for design continued, so she returned to the bazaars of Afghanistan, where she found intricate guns for customers back in Australia.  “I’d buy and ship these great 19th-century guns that the British left behind, beautiful guns with ivory and mother-of-pearl,” she says. “I wasn’t an expert, but I knew these guns were beautiful and decorative.”

But after the stock market crash of 1987, demand for her pricey dresses started to fall, so Anna looked to return home to Hungary.  She was curious to see what almost fifty years of government control had done to the artistic community.  But when she saw what passed for “art” in the formerly glorious Imperial capital of Budapest, she found little to celebrate.

“They were making this ghastly stuff, but I thought they were diamonds in the rough.”

So in the early 1990’s, she established a studio in Budapest and worked with her painters to create a collection of hand-painted porcelain based on botanical art.

“I always liked hand-painting because my fabrics were painted and embroidered,” she says.

Where does Anna Weatherley get inspiration for her designs?

Anna’s designs reflect her appreciation for the artistry of sixteenth, seventeenth, and eighteenth-century botanical artists, which she studied during trips to the Victoria and Albert Museum in London. Initially, she took botanical books to Budapest to show her artists.

“It took a long time to reeducate them. I was losing money, but I wanted to nurture them, and I didn’t want to lose them.”

Anna’s first collection, released in 1993, was named “Redoute Gardens” after the renowned French botanical artist Pierre-Joseph Redoute.  Her goal was to honor the spirit of the artist without replicating it exactly. Next came “Hooker Fruit,” a collection of plates and serving pieces based on Joseph Hooker’s 1890s drawings.

“What I loved about his fruit was that they were a bit damaged or a little bit rusty looking,” Weatherley recalls. “After that every leaf I designed had to be torn or have a little hole in to make it look like a bug had been having lunch on it.”

Next came the tulips of Alexander Marshall – an experiment in color exploration. “Tulips are very gusty flowers,” says the designer, “and the colors are absolutely amazing.” She then turned her attention to the pioneering work of Maria Sibylla Merian, a scientific illustrator renowned for her portrayal of the flora and fauna (and bugs!) she found on a trip to South America. “I faithfully painted her bugs, and nobody wanted to buy them.”

But bugs would play a key role in Weatherley’s masterful renderings.

“One day I got a call from Budapest saying that the painters had just finished one of my collections and they found a large black spot on all the porcelain.” Undaunted, Weatherley followed the example of one of the world’s greatest porcelain manufacturers – Meissen. “At the Smithsonian I learned that in the early days when Meissen had problems with production, bugs were sometimes painted over them.”

A new design direction was born. “Bugs became my best seller with the introduction of ‘Budapest Spring'” a delicate arrangement, mostly dominated by butterflies. More garden series followed. “Pannonian Garden” was introduced in 1998 and pays homage to the bounty of florals that thrive around Hungary’s countryside dwellings. Then came “Treasure Garden,” which was inspired by German painter Georg Ehret. Since much time was spent in Budapest and at tabletop shows throughout America, Anna had little time to create her own garden in Arlington; but no matter how long she was away, she always found weeds standing when she returned. Her testament to those weeds is “Green Leaf.”

“Leaves have the most intricate texture and are more difficult to paint than a lush flower.” In the Spring of 2001, she introduced “Morning Glory”, a common flower throughout Hungary. “This is one that God and I designed together, because it has an innocent charm and is fresh and young and not contrived. I wanted to have more free-form, which I like because a painter can exercise a little more personality.” How is Anna Weatherley dinnerware created?

Starting with an illustration, Anna’s painters carefully apply paint using very fine brushes onto lustrous white porcelain, which is then fired several times at high temperatures to set the designs and harden the pieces.  Each plate takes two days to paint, while a large dinner set might take as long as three months.

Anna employs 60 master painters in Hungary to execute her designs.  While each painter has a distinct technique and his own secret way of mixing colors to create their designs, the flowers and fruits are painted mostly by men. By contrast, women tend to specialize in painting the charming bugs and butterflies with miniature detailed wings and legs and gold-dipped eyes. Grasshoppers are a favorite of the team and each one is given a different personality.  To finish the pieces, borders are softly brushed onto the edges by a single painter with mastery in this special technique.

Which celebrities own Anna Weatherley dinnerware?

When Princess Diana visited Washington D.C. in the 1990’s, Washington Post publisher Katharine Graham held a luncheon in her honor and presented her guests with Anna Weatherley porcelain gifts.  This same visit prompted Anna Wintour to place an order for a present for Princess Diana. For this commission, Weatherley produced a pair of cachepots decorated with pears, cherries, and gooseberries based on British botanical art.

For First Lady Laura Bush, Anna created 75 seven-piece place settings of the Magnolia Residence China Service, featuring magnolia blossoms, butterflies, and insects in a design inspired by the flora and fauna found on the White House grounds. According to Weatherley, Mrs. Bush had seen her work on several friends’ dinner tables. And for The Blair House, the official guest house of the White House for visiting heads of tastes, Anna created and donated a charming breakfast tea set. Anna’s latest introductions include a line of exquisite handpainted lamps. Throughout the years, Anna’s handpainted porcelain pieces have been featured in Architectural Digest, Veranda, Vanity Fair, Southern Accents, Elle Decor, Washington Post, Traditional Home, House and Garden, and Town & Country.  If you own any Anna Weatherley pieces, we’d love to see them.

Special thanks to Anna Weatherley, Devine, Vanity Fair, The Washington Post, The White House, and The Blair House.

How to Dine Like Royalty from Queen Victoria to Lady Diana 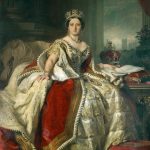 How to Create the Amazing $30,000 Met Gala Table Setting
Scroll to top