Blog - Latest News
You are here: Home / Arranging Flowers with Jeff Leatham from the Four Seasons George V in ...

The flowers at the Four Seasons George V in Paris are so stunning, they’ve made the hotel a must-stop for anyone visiting the 8th arrondissement.  Go any time of the year and I promise you’ll be thrilled. Three times a week, the hotel receives a shipment of around 10,000 fresh flowers from Amsterdam, which are used to lavishly decorate the hotel’s reception areas and guest rooms.  In case you’ve wondered, the masses and masses of chic arrangements are created every week by American Jeff Leatham and his team of 11 florists. A native of Utah, Jeff originally worked as a model in Paris, and after strolling past a small flower shop, he was struck by the beauty he saw inside.   “I had a flash of flowers as works of art, tiny elements that could be combined to create something amazing,” says Jeff.

A friend referred him to the Four Seasons Los Angeles, which he joined as a part-time florist although he had no formal experience arranging flowers.  But his talents soon became noticed, and after an event in L.A. brought the team from the Four Seasons George V to his hotel, he was offered a position in Paris.  He moved there a week later, and the rest is history.  Jeff is now the Creative Director for Four Seasons Hotels worldwide, and he’s created flowers for Cher, Oprah, and Eva Longoria.

But he remains accessible and down to earth.  For example, here are a few of his flower-arranging tips (via The Telegraph):

– Use simple vases that don’t distract attention from the display

– Never use more than three types of flowers in a display

– Don’t mix white flowers with other colors (except, if necessary, yellow)

– If using a clear vase, top up the water with Perrier – the bubbles latch on to the stems and add sparkle

If you love Jeff’s style and would love to recreate it at home, here are three simple ways to do it: 2) Get a crystal vase from Jeff’s exclusive collection for Waterford, Fleurology.  When it arrives, run and get the prettiest flowers you can find.  Take a look at how he’s transformed a few simple vases below:

3) Reserve a spot in one of Jeff Leatham’s two-hour floral workshops.  They are offered four times a year, and they’re complimentary for hotel guests.  Click here for more information.

Will you be in Paris soon?  If so, we’d love to see your pictures. 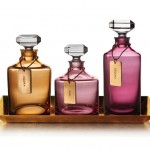 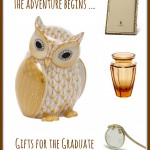 A Joyful Toast To the Class of 2016: Graduation Gifts
Scroll to top