Blog - Latest News
You are here: Home / Mottahedeh: At Home with President and Mrs. Ronald Reagan 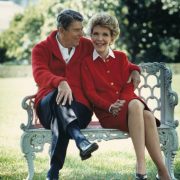 As an actor who became one of our most beloved Presidents, Ronald Reagan brought a new sense of style and glamour to the White House.  Ronald Reagan wanted the country to feel optimistic again, and Nancy Reagan dressed to reflect this: The Reagans at the 1981 Inaugural; image telegraph.co.uk

But in their private lives, the Reagans were completely devoted to each other, making time for tender moments together: When Christie’s auctioned off their private collection to benefit the Ronald Reagan Presidential Foundation & Institute in September 2016, we got a glimpse at what they treasured in their post-White House years at their elegant home at 668 St Cloud in Bel Air, California, where both lived until they passed away. What caught our eyes were some interesting pieces by Mottahedeh that spoke of their love for an earlier, romantic Americana of the 19th-century.  These included a magnificent carp tureen, which according to Mottahedeh president Wendy Kvalheim, was proudly displayed in the Reagans’ living room (instead of the more predictable dining room): Following along the whimsical fish theme, they also owned a collection of oval carp platters, reproduced with permission from the Dallas Museum of Art: … shown below in their private dining room: Also in the collection were a pair of Diplomatic Eagle wine coolers, originally commissioned for the diplomatic reception rooms of the Department of State and the White House.

The designs on these pieces, adapted from Chinese export porcelain circa 1810, feature one of the earliest depictions of the American eagle found in ceramic decoration: And our favorite piece, this monteith bowl (traditionally used as a punch bowl), given as parting gifts by President Reagan to his cabinet members. On the outside, the bowl bears the Great Seal of the United States along with quotes from President Reagan.  On the inside, it has a Presidential Seal surrounded with eight shields dated for each year of the Reagan presidency.  And finally, on the underside, it is inscribed “Presented by the President and Mrs. Reagan was presented by Ronald Reagan Recalling Eight Memorable Years 1981-1989).” What a fascinating glimpse into the private lives of these two American icons!  And amazingly, most of these pieces are still being faithfully produced by Mottahedeh.

Interested in learning more?  Click here to read about the auction from Christie’s, which raised a total of $5,740,625 for the foundation.  And be sure to check out the cocktail napkins embroidered “the drinks are on the house at The Reagans.”  You gotta love their style!

To see more of the classic Americana china that the Reagans loved, click here to view our full Mottahedeh collection.

The Definitive Guide to Christofle Flatware 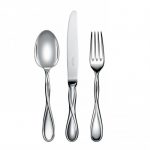 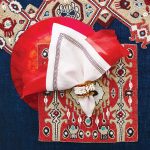