Blog - Latest News
You are here: Home / Why You Need A Rock Star At Home: RabLabs’ Anna Rabinowicz 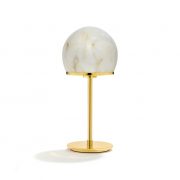 One of my favorite things about meeting new people is hearing their stories.  I especially love hearing about people like designer Martyn Lawrence Bullard, who started doing one thing, moved on to something else, and then finally took all those pieces together and ended up creating something that’s unique to him.

So when I found out that RabLabs founder Anna Rabinowicz went from designing prosthetics to working with gemstones, my ears were piqued.  How did that happen? Here’s the story: When Anna was younger, she and her family traveled around the country for her father’s medical career (he was an academic and a doctor).  But on the weekends, they visited mineral shows, where she was mesmerized by the stones (so old!) and their complexity and range of colors.  Back then, collecting agate stones was just a hobby.

Anna grew up, earned master’s degrees in design and engineering from Stanford, and then started work developing medical prosthetics.  At the same time, she taught industrial design at Parsons.

The process of being in a classroom, speaking about creating objects, and delving into research just melded together for her.  She learned that she loved the beauty of natural things.  “Whether it’s the body or elements of nature, they’re one and the same to me,” she says.

Fast forward to 2002, when she turned that love of natural beauty into a line of objects called RabLabs, which combined minerals, metals, and stone into sophisticated products for the home.

Like all the best artists, she ended up following her passion, and as luck would turn out, her first product – a set of Lumino coasters crafted from matched agate slices – was an instant success and continues to be of one of the company’s best sellers. The product was a hit because in a world filled with mass production, we’re all looking for something that’s intrinsically unique.  Anna’s gift is that she saw how objects that have stood the test of time will continue to grow old with us.

In one of her first interviews with Amara, she said: “I am most inspired by the forms, structures, and textures found in nature … It is incredibly inspirational to realize that what appears so magical about nature to us as humans is also a mechanism for survival, for the animals and plants themselves.”  And later in another interview with Cottages and Gardens magazine, she went on to say: “I use materials that are designed to last forever, so if people love them they will pass them down from generation to generation. They become modern-day heirlooms.”

But it’s a lot of hard work to turn that vision into these unique pieces.  For example, Anna might start with a massing of raw Italian alabaster: In her studio, this becomes a foundation for a new collection.  She researches the material, sketches ideas for new concepts, and tinkers with it (to the millimeter!) until she’s found the best expression of their natural textures. Working with artisans in Brazil and Italy, Anna refines their processes and works with them to realizing her designs from stone: Then, prototypes are submitted and adjustments are made: Until something extraordinary is created: Amare Salt and Pepper Set in Rose Gold by RabLabs What I love about these pieces is that they fit perfectly well in our modern world.  You can set down the coasters next to the lamp and the candle on a table, and at a casual glance nothing seems out of place.  But when you look closer, you realize that the objects are fashioned from natural materials like agate, marble, and alabaster.

They did not just pop out of an injection mold, precisely shaped like a million other pieces.  Each one has special veins and patterns that only natural stone has.  Each one attained its shape only through hours of work by an artisan.  When you pick one of Anna’s creations up, you’ll be surprised by their heavy weight.  And when you gaze at them more closely, you’ll start to trace the veins and notice patterns, even faces, in the stones.

Eventually you’ll be mesmerized by a little world that draw you in.  And that’s when you realize, “This is art.” 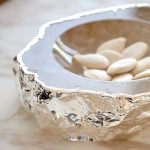 What to Know About RabLabs Products
Scroll to top